“Bear with me” on this rather long post but I found this in my archives and thought it worth sharing.

Gimme a hug! A phrase and gesture that encompasses a wide variety of denotations and connotations. By definition, hug seems to connote good feelings. Its etymology comes from a Swedish word, hugga, meaning to console. Words frequently used to define hug are embrace, enfold, affection, cherish, close, comfort and console. It is described as a natural instinct or response to feelings of compassion and need.

Scientific research supports the theory that stimulation by touch is an absolute necessity for human existence. Touch is recognized as a therapeutic tool for healing. Touch is used to help relieve pain and anxiety, and to bolster the will to live. Various experiments have shown that touch can: make us feel better about ourselves; have a positive effect on a child’s language development and IQ. Clearly, then, touching can cause measurable changes in the toucher and the touched.

Therefore, while there are many forms of touching, I will focus on hugging as a particularly special form that promotes health and healing. A certain first grade Sunday School teacher I worked with hugged each child before they left class. She told me it was more for her benefit than the students’ because she received enough unconditional love from those hugs to last her a whole week. The following short poem by Clint Weygand expresses what I imagine that first grade teacher must have felt in those hugs:

I want a world where people

are respected for the ease and

warmth of their melting…

rather than the strength of their walls. 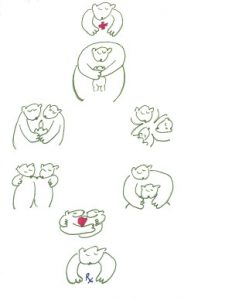 In this special form of touch called hugging there are specific techniques. The first and most commonly known is the Bear hug, named for the animal family Ursidae, which seems to have mastered the art. In the Bear hug one hugger is usually larger than the other but this is not a requirement. The larger hugger stands straight or slightly curved over the smaller one, arms wrapped firmly around the other’s shoulders. The smaller hugger stands straight with head against the larger hugger’s shoulders or chest, arms also wrapped firmly around whatever area they may be reaching. Bear hugs are common with parents and offspring, or with friends who want to say, wordlessly, “I’m your friend. You can count on me.” Grandparents are especially good for Bear hugs. I remember sharing Bear hugs with my grandfather who was six feet tall and with my grandmother who was four feet eleven inches tall. Grandpa’s hugs had a firm secure feeling while Grandma’s were soft and reassuring.

The next two types of hugs seem closely related because they are dependent on the number of people involved in the hug. The first is the Sandwich hug. As a parent, I have experienced many of these, as they often involve parents and children. The child in the middle of my Sandwich hugs have been of various ages. We even have had Sandwich hugs with multiple fillings (more than one child). Dad is always the bottom piece of bread, mom the top and the littlest child gets to be the lightest ingredient, the lettuce. These are great fun! Whoever is in the middle of a Sandwich hug gets a double dose of comfort and support.

The Group hug is associated more with friends and family. I have shared Group hugs with many different types of groups, but one I recall was with co-workers during an extremely busy time and we needed to know that each of us supported the others. This simple Group hug became a powerful emotional release and when we parted we had a renewed sense of unity and belonging.

A more casual, playful hug is the Side-to-Side hug. These are experienced by acquaintances who are not sure of each other’s hugging rules or don’t want to seem overly affectionate. I have seen this type of hug common with teammates to show comraderie or cooperativeness.

The Back-to-Front hug is often experienced at the kitchen sink and expresses an “I’ll back you up” sort of attitude.  Hopefully with the hugger reaching for the dish towel and drying the dishes.

The most romantic of all the hugs is the Heart-to-Heart or Heart Centered hug, sometimes considered to be the highest form of hugging. This type of hug begins with direct eye contact, arms wrapped around shoulders or back, and there is full body contact. Compassion and understanding then flow from heart to heart. This is where pure unconditional love is found. A example of this type of hug is often seen at wedding receptions as the young couple dances their first dance, shutting out all distractions and focusing only on each other. The dance becomes a Heart Centered hug, full of lingering, caring, and tenderness, genuine and supportive.

A person who supports and promotes hugging is considered to be a Hug Therapist. They are open to the child within that needs love and support, and is willing to reach out and share those needs with others. The following is a hugging prescription which, as a self-acclaimed Hug Therapist, I highly recommend.

Hugging is healthy. It helps the body’s immune system, it keeps you healthier, it cures depression, it reduces stress, it induces sleep, it’s invigorating, it’s rejuvenating, it has no unpleasant side effects, and hugging is nothing less than a miracle drug.

Hugging is all-natural. It is organic, naturally sweet, no pesticides, no preservatives, no artificial ingredients and 100% wholesome.

Hugging is practically perfect. There are no movable parts, no batteries to wear out, no periodic check-ups, non-fattening, no monthly payments, no insurance requirements, non-taxable, and non-polluting.

And of course, it is fully refundable and refillable.  So hug someone today.